Combining infectious post-hardcore anthems, heavy metal riffs and electronic beats with rock/rap vocals, New Jersey-based quartet CONCRETE DREAM have self-defined their one-of-a-kind sound as “trap metal.” Their debut single “Pit Trap,” featuring guest vocals from fellow rap-rocker HYRO THE HERO,premiered last week (Friday, May 10) with the below music video exclusively via Outburn Magazine. It is currently available across all digital streaming platforms at this link: https://onerpm.lnk.to/pittrap. View the video, directed by Dale Resteghini who had introduced the band to HYRO THE HERO and has also worked with acts including Nicki Minaj, Lil Wayne and Fallout Boy, here:
The single marks the first new music from their self-titled debut full-length album due June 28 via E-Train Records. HYRO THE HERO says, “Concrete Dream asked me to spit a verse on ‘Pit Trap and when I heard it, I went crazy.It’s the perfect mix of trap and metal. This song should be the soundtrack to any turn up.” 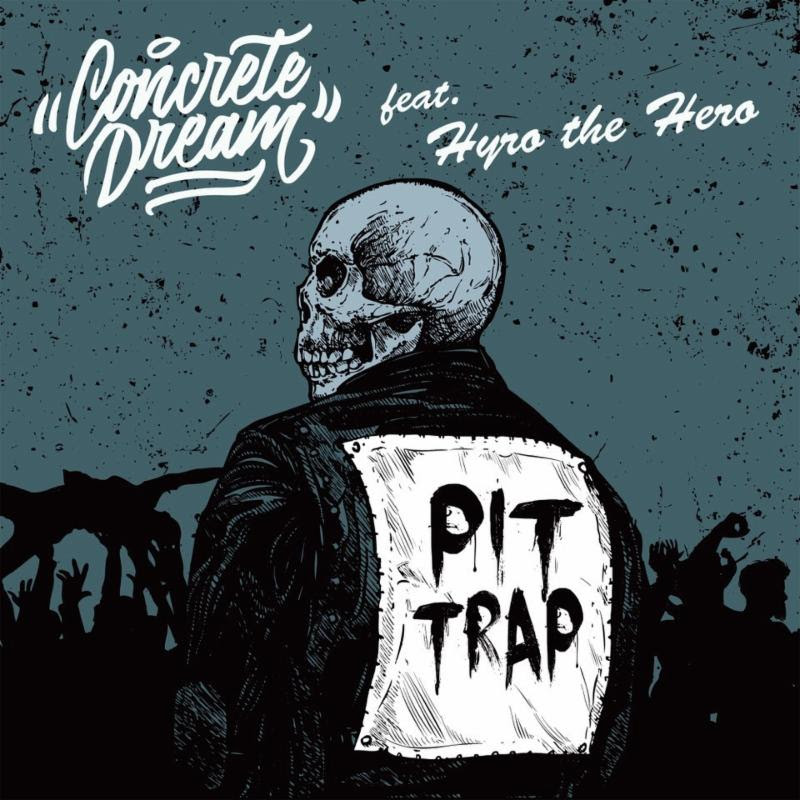 “Pit Trap is a song dedicated to those struggling, fighting and finding their own unique way through life, aka the “pit,” shares bassist/vocalist Alejandro Mena.
Vocalist Jeremiah Mayhem further adds, “Some people are born into the struggle and some people are born in the struggle, and a product of a bad environment, and that’s our character, Tony. While the pit is his escape, it’s also his downfall. He’s constantly causing trouble–it’s his retaliation with anger for what life caused him.”
CONCRETE DREAM‘s upcoming release was recorded, mixed and produced by Ricky Armellino (Ice Nine Kills, This or The Apocalypse) at Think Loud Studios in York, PA. Armellino, who also worked with the band on their 2018 EP Relationshit, shared what it was like working with the band, saying, “(Jeremiah) Mayhem and all of Concrete Dream actually walked into the studio with the goal of telling stories. I love that. They have so much enthusiasm and energy and I got to be there to help put a few exclamation points on what they were doing. I love working with these guys, they believe in themselves and it’s super infectious.” Further details will be revealed in the coming weeks.
Formed from members of varied cultural and musical backgrounds,CONCRETE DREAM brings forth a narrative of today’s culture and the struggles of life that are equal parts mercy and power. Their live performance draws attention to these concepts with its raw intensity and passion that’s accessible to audiences big and small. Having performed with acts including Asking Alexandria, Iseestars, CKY, Tetrach and Leeway, they will next be seen at Diablo Fest Pre-Bowl Party in Brooklyn on May 17 with M.O.P. before heading to joining P.O.D. alongside comrade Hyro the Hero for a few shows.A full list of appearances is as follows:
5/17    Brooklyn, NY – Diablo Fest @ Brooklyn Bazaar (with M.O.P.)
5/19    Poughkeepsie, NY – The Chance Theater #
5/21    Sayreivlle, NJ – Starland Ballroom #
5/29    Jersey City, NJ – Pet Shop JC
6/21    Jersey City, NJ – FM Bar (with Red Hymns)
# with P.O.D., Hyro The Hero, Nonpoint & Islander
For more information on CONCRETE DREAM, please visit
FACEBOOK | INSTAGRAM | TWITTER |  YOUTUBE
Tweet