Skip to content
You are here
NEW YEARS DAY ANNOUNCES U.S. SPRING TOUR WITH FALLING IN REVERSE
(Anaheim, CA – February 5, 2019) – Female fronted rock band New Years Day have just announced that they will be joining Falling In Reverse as support on the band’s U.S. Spring tour. The tour will kick off in Las Vegas on April 20th and will wrap on May 24th in Los Angeles. Tickets are available for purchase HERE.
Check out the band’s newest track “Skeletons” HERE. The song is off of their forthcoming full-length album out this spring on RED MUSIC.
The band recently announced an exclusive NYC fan event presented by Loudwire on February 7th at Sony Square. The event will include an exclusive, intimate New York performance and Q&A with the band, followed by a Meet & Greet. Topping it off, attendees get first access to exclusive New Years Day merchandise. For more information on the event and to RSVP, click
HERE, and make sure to tag #NewYearsDay #SonySquareNYC.
New Years Day recently graced the cover of Spotify’s “Heavy Queens” playlist and topped playlist for a full week. Additionally, the track was featured on Spotify’s “New Noise“, “Today We Rock“, “Nu Metal Tracks“, and “Rock Hard” playlists. “Skeletons” even made Pandora’s “Best of The Year for Rock” list. The band has racked in over 44 million U.S. streams alone to date.
Formed in Orange County, Calif. by Ashley Costello, New Years Day shook the scene with their Century Media debut, Victim to Villain, in 2013 featuring their breakout single “Angel Eyes.”The five-piece later cemented their place in the heavy music landscape with their Epidemic EP and critically-acclaimed Malevolence full-length in 2015, clocking more than 20 million views on YouTube. The band has since become the most visually-captivating group in modern rock, playing for millions of fans around the world, sharing the stage with Ozzy Osbourne, Halestorm, Nine Inch Nails, Escape The Fate, Hellyeah and Five Finger Death Punch while also headlining the longest-running touring festival, Vans Warped Tour, in 2017. As new challenges and new worlds beckon, the band released their most recent EP, Diary of a Creep, in January to pay tribute to the artists who shaped them thus far. The EP featured renditions of Garbage’s “Only Happy When It Rains,” New Order’s “Bizarre Love Triangle,” No Doubt’s “Don’t Speak” and their original track “Disgust Me”. 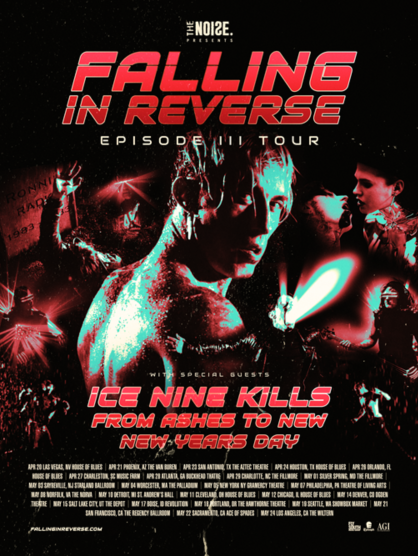