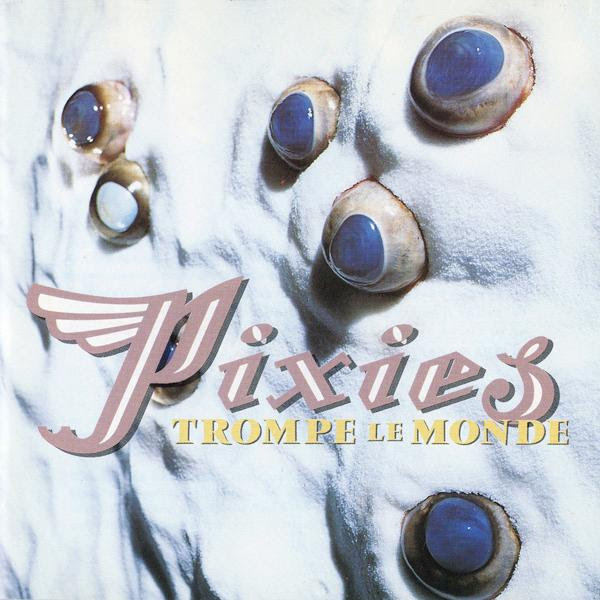 Translated from French to mean “fool the world,”  Trompe Le Monde showed the band still restless to push their sound forward.  Recorded between Burbank, Paris, and London, with producer Gil Norton again at the controls, their fourth album is arguably their most playful, with Black Francis’s lyrics on UFOs and conspiracy theories keeping things weird while power pop creeps in to amplify the space rock established on predecessor Bossanova.
Featuring singles “Planet of Sound,” “Alec Eiffel,” “Letter to Memphis,” and a flawless cover of The Jesus and Mary Chain’s “Head On,” Trompe Le Monde goes full throttle with 15 tracks coming in a quickfire 40-minute salvo.  Receiving critical praise at the time and being supported by a huge tour that included playing stadiums with U2, it also proved to be the end of act one for the band, with them taking over a decade before returning to the stage together.
A brilliant record, Trompe Le Monde sounds just as fresh 30 years on with outlets such as Pitchfork concurring, retrospectively scoring it 9.3, they called it “more aggressive than anything in their catalog but also more confident.  They can handle this now, and they do.”
Trompe Le Monde Track List:
Side A
Trompe Le Monde
Planet of Sound
Alec Eiffel
The Sad Punk
Head On
U-Mass
Palace of the Brine
Letter to Memphis
Side B
Bird Dream of the Olympus Mons
Space (I Believe In)
Subbacultcha
Distance Equals Rate Times Time
Lovely Day
Motorway to Roswell
The Navajo Know
Pixies will return to touring in September, playing a series of festivals, headline dates, and special shows with Nine Inch Nails.  Dates are below, and ticket information can be accessed at www.pixiesmusic.com
SEPTEMBER
10   Capitol Theatre, Port Chester, NY
11   Stage AE, Pittsburgh, PA
13   Old Forester’s Paristown Hall, Louisville, KY
14   Foellinger Theatre, Fort Wayne, IN
16  Summerfest, Milwaukee, WI
17   The Factory at The District, Chesterfield, MO
18   The Waiting Room/Outdoors – Omaha, NE
19   Riot Fest, Chicago, IL
21   Jacobs Pavilion, Cleveland, OH  (with NIN)
23   Jacobs Pavilion, Cleveland, OH  (with NIN)
26   Cain’s Ballroom, Tulsa, OK
About the Pixies
The Pixies have been acclaimed as the most influential, pioneering band of the late 80s alt/rock movement, having blazed the trail for artists from Nirvana to Radiohead to Pearl Jam.  Over the past decade or so, a whole new generation of music fans have been discovering the band’s iconic “loudquietloud” signature sound. After five genre-defining studio albums — including the now-Platinum-certified Doolittle – Pixies disbanded in 1993, and then launched their reunion tour in April 2004, playing to sell-out crowds across the globe for 15 years, a far longer period of time than they were a band originally.  But writing, recording, and releasing new music was something that the band had been wanting to do for a long time, so they secretly booked studio time in Wales for the fall of 2012. Six days into the recording, founding bassist Kim Deal decided to leave the band; Black Francis, Joey Santiago and David Lovering made the decision to carry on, finishing and releasing the band’s first studio album in more than two decades, 2014’s Indie Cindy. Also wanting to play live, the three began working with a number of touring bassists, including former A Perfect Circle bassist, Paz Lenchantin who came out on the road with the band in 2014. The band welcomed her as Pixies’ permanent bassist in 2016.  Since then, Pixies have released two more studio albums:  Head Carrier in 2016, that marked Paz’s recording debut with the band, and 2019’s Beneath the Eyrie that was recorded with producer Tom Dalgerty.
Tweet